Give Us Hope, Mr. Lawsky!

Many old people, cancer patients, newly married couples, single moms, among others have been evicted by the loan servicer Ocwen. Many have seen their short sale requests turned down only to watch their homes sold for lower prices to builders and investors. As per the allegations, Ocwen used deceptive and unfair means while working with borrowers who were delinquent and underwater. The company has been accused of misrepresenting facts while filing foreclosure documents, charging unjustified fees for default-related services and forcing borrowers to buy unnecessary insurance policies, among others.

Greed of the lenders led to the subprime mortgage crisis which in turn created an economic crisis which led to people losing income and jobs. People struggled to meet their high-interest mortgage repayments. Some requested for forbearance, some wanted their loans refinanced, some thought a short sale would help ease the strain on their finances.

Greed, though, was not dead yet. Those engulfed by greed only seek profits. To them it does not matter even if it comes from someone else's misfortune. One man finds himself standing against an organization driven by greed of such intensity that has seldom been seen before.

Benjamin Lawsky, Superintendent of the Department of Financial Services, had little option but to block the Ocwen-Wells Fargo deal in a bid to prevent more Americans being unwittingly led towards foreclosure by a loan servicer with a consistent track record of delay in providing statements, adding expensive and at times unnecessary insurance to accounts, not applying payments to account or applying them late. What more, its Chairman is the single largest shareholder in a company (Altisource Portfolio Solutions) that profits immensely from foreclosures and snatches away the livelihood of real estate agents trying to feed their families.

Mr. Lawsky's grandparents, immigrated from Nazi Germany to an apartment on 192nd Street after his grandmother’s father had been killed at Auschwitz; his parents, in turn, had made good through public schools, graduating from Bronx Science and C.C.N.Y. His father was in the U.S. Public Health Service, and Mr. Lawsky and a twin sister were born on a Navy base in San Diego before the family moved to Pittsburgh, where Mr. Lawsky grew up waiting tables and selling funnel cakes out of a food cart. As a high school point guard, he was recruited by several small schools but chose to attend Columbia, where he played briefly as a walk-on before taking up long-distance running. He wanted to study architecture, but, faced with drawing cubes, switched to art history. He became interested in the law when a controversial exhibition of Robert Mapplethorpe photographs in 1989 sparked a national conversation about art and the First Amendment. He graduated cum laude and enrolled in Columbia Law.

Mr. Lawsky has, in the past, questioned Ocwen and gotten them to agree to monitoring but more is expected this time around. For a man who threatened to take away Standard Chartered's license, he can surely do more than just deliver a gentle slap on the wrist to Ocwen.

I quote Ana Merlan, "Lawsky wanted to know why he shouldn't pull Standard's license to operate in New York—a move that would cost the bank billions. The financial world erupted in chatter.

From a sleepy federal investigation that was going nowhere fast to punishment that threatened Standard's very existence, it was clear there was a new sheriff in town."

It is time to be brave, Mr. Lawsky. Give the people some hope.

(The author, Saurabh Singh, is a student of the Buddhist monk Thich Nhat Hanh. He is a Foreclosure Prevention Activist and a vegan. He is also a member of People for Ethical Treatment of Animals(India), Consumer Advocates in American Real Estate, UNITES Professionals and supports charitable causes and crowdfunding.) 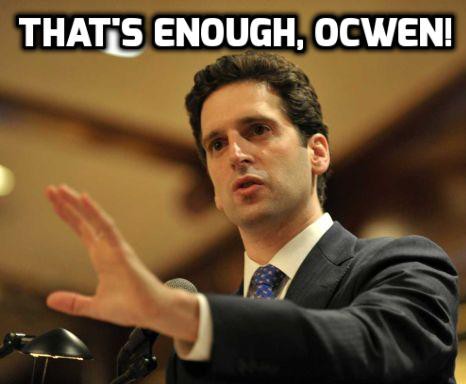